Alex started riding at the age of eleven when a friend dragged him to the local riding school. Despite being rather reluctant to start with, once hoisted aboard a donkey called Jimmy, Alex has never looked back.

At the age of 13, Alex spent a summer with James Roberts for whom he would later work. You could say it was a slightly odd choice for an aspiring dressage rider to go and work for a cowboy in the middle of Wiltshire however the things he learnt whilst at James’s are the stuff that sticks.

READ MORE
Whilst there, Alex learnt how quickly things can go from bad to worse with horses and the importance of getting it right the first time round. To say that there was plenty of variety would be no understatement: you name it, Alex saw it. But it wasn’t all “yehaww cowboy”: Alex was shown the intricacies of starting and developing a young horse’s foundation and how to keep a horse’s confidence intact whilst getting on their backs for the first time.

Alex later went out to Switzerland to work for Carmen Zulauf, a natural horsemanship instructor based at the Swiss national training ground (the IENA). During his time at Carmen’s, he stayed in the most luxurious accommodation: a shipping container at the back of the barn complete with a window and a bed! During the summer it was hot enough to fry a chicken on the floor of the container. Unfortunately, there was no washing machine and there was no window that would have been large enough to let the smell out. Alex puts that experience down to a test of character and proof that no matter how shiny his boots are he can still get down and dirty like the rest of them.

It was at this time that Alex made the call to bite the bullet and head to AM Dressage. During his time there, he had the opportunity to ride some of the highest quality horses in the country from 3 year olds right through to international Grand Prix horses. It was during his time there that he found his youngster Diamond Hill, a small chestnut with what you might call a big character. On only his second outing to a dressage competition, he got a direct qualification to the nationals with a 2nd place at the wellington premier league in the 4 year old class. 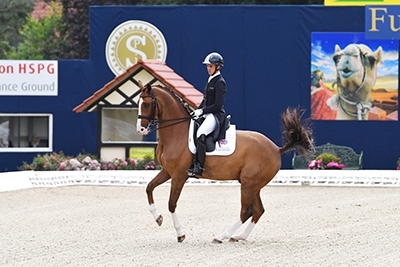 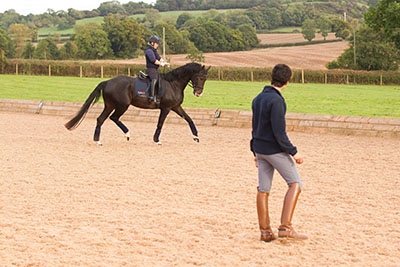 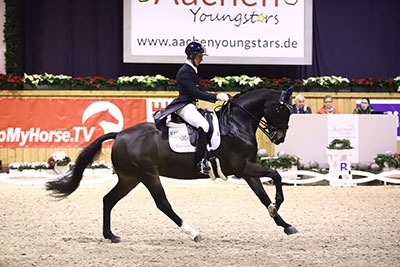 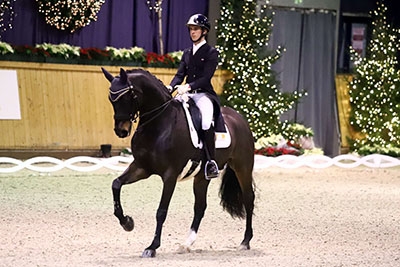 In October 2016 Alex was nominated by selectors to join the BEF Excel Talent Programme. This is aimed at up and coming riders and assists them with developing their career – all sorts of training from psychology, media training to dressage itself are covered.

2016 saw top 3 placings for Damo at the Regionals at Novice and Elementary level as well as a successful debut at Medium level, easily qualifying for the Winter Regionals 2017. Lula qualified for the 4 year old Semi- Finals held at the Hartpury Festival of Dressage in July 2016. Ruben has had a terrific year and together they have enjoyed a very successful Premier League season with plenty of top 10 placings. At Hickstead CDI they made their International Young Rider debut – winning all 3 classes! To finish the year, they ventured abroad to Exloo CDI in the Netherlands and well as Aachen in Germany!

2018 saw Damo making his PSG debut as well as some super placings at Premier leagues. They were selected to ride at Hagen CDI and then selected for the Young Rider team at the European Championships.

Alex is a BD Accredited trainer and BD List 3 Judge, and also holds his UKCC3 qualification.

DIAMOND HILL
By Don Diamond, a 7 year old with a very cheeky character in a pint sized package at 16 hands.

HERO
By Contender, Hero is a 6 year old gelding with elasticity, paces, and character worthy of the name.

HORELJA
By Sir Fashion, Lula is a 5 year old mare who is the princess of the yard. Her strong character is matched by her super moves.

JECARI
Oprah is a powerful black mare who qualified for the 4 yo semi finals at the Hartpury Festival of dressage this year.

KICKBACK
Sacha is another pint size pocket rocket, at 3 years old he is already a favourite on the yard! Definitely one to watch for the future!